Robert Heald Beckett in Brant Broughton on 22nd Jan 1880.  His parents were Francis Beckett who was a grocer/carrier in Front Street and Harriett (née Heald).

Robert joined the Royal Navy and was in Portsmouth in 1901.  By 1911 he’d left the service and was working as a factory engine stoker at the Ericsson Telephone works in Beeston Rylands, near Nottingham.  That October he married Edith Annie Freeman (1886-1972) in Breadsall, Derbyshire. They then lived at 43 Gladstone Street, Beeston where they had 2 sons – Robert Thomas in 1912 and John in 1913.

During the Great War he was recalled to the Navy and was killed when HMS Bulwark was destroyed by an explosion as she took on ammunition at Sheerness.  Only 12 of the 726 crew members survived.  There is a memorial to those lost in the Dockyard Church, Sheerness.   His name is also on his parents’ gravestone in Brant Broughton churchyard. 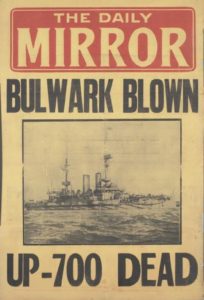