Long Bennington builder John William Foster married Elizabeth Anne Sarah Jane Johnson (also from Long Bennington) in 1885.  She already had a son and they had another 10 children, including:

In 1891 they were living on North Road, by 1901 they were in Welborns Lane, where Richard had started work as a bricklayer’s labourer and Mary was ‘mothers helper’.  In 1911 some of the children were at home while Richard, John and William were staying nearby with their grandfather – John Foster, a housepainter.

John Foster (known as Jack) joined the Sherwood Foresters in Feb 1914 and so had 5 month’s training when war broke out.  He was sent to the Western Front with 2nd Battalion and was present at the Battle of Mons and most of the fighting since.  After a whole year at the front he left the trenches at Ypres for 6 days leave in Long Bennington in Nov 1915.  He’d already fought at at Armentieries, La Bassee and Hooge, where he’d been buried alive in a trench for a time and was reported as missing.  He was now in a machine-gun section and one of only 30-40 men remaining of his original draft of 500 men.

Jack transferred to the Machine Gun Corps (formed Oct 1915) and sent this letter to the Grantham Journal in Nov 1916.

In Nov/Dec 1917 he was involved in the Battle of Cambrai.  He was recommended for a DCM ‘for rendering aid to wounded comrades under heavy fire’ on 6 Dec 1917.  He didn’t get the medal as his CO2 was wounded, but the General wrote to him and he was promoted to L/Cpl.  In Feb 1918 he was given 14 days leave and  his brother William was given a short furlough from the Northumberland Fusiliers to meet him.

Jack was killed on the 22nd Mar 1918, the second day of the German spring offensive (Battle of St Quentin).  According to his officer he was killed while firing his (machine) gun.  But his death wasn’t reported for nearly a month and his body has not been identified. He was 23 and is commemorated on the Arras Memorial.

Postscript.  Jack’s brother William survived the war and married Audrey Stainton in Spilsby in 1930.  Their son, Jack Derek Foster (born 1932) was living in Long Bennington in 2014.   He was last seen in Grantham on 23 Dec 2014 after a hospital visit.  Sadly, after an extensive search by police and local residents over Christmas, his body was found near Foston on 6 Jan 2015. 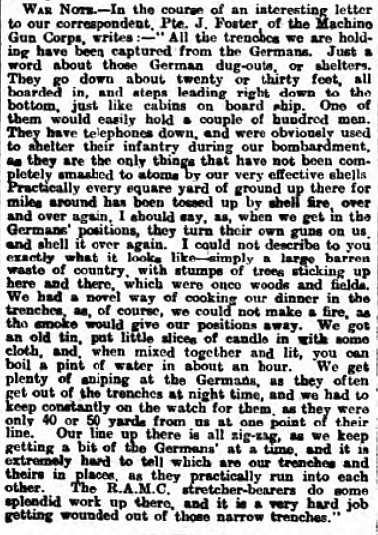