Prior to the Battle of Hastings in ‘1066 the English had been in a position to defend their ancient boroughs but they had not learned the newer arts of castle building. William the Conqueror saw to it that a castle was built in every county town and in a number of other strategic places

The Norman castles were simple in construction, consisting of a mound of earth called a MOTTE, generally with a water-filled ditch around it, and bridged across.  A court yard or BAILEY below it was also enclosed within a ditch and bank.

In the early years following the Conquest these castles were very primitive buildings. The motte and the bailey were defended by a stockade and within the bailey wooden huts were constructed

These ‘castles’ did not develop into the more substantial stone castles until the generation after the conquerors. The development of the solid square ‘keep’ often took place on fresh ground within the stockade and not on the motte itself. In times of war-like unrest, the inhabitants of the settlement would move into the keep. This must have proved a most unpleasant experience in such a dark, dank and comfort-less place.

It is still possible to trace the line of the ditch down the track which leads one round to the rear of the village school. Unfortunately the grove of trees prevents a full-scale ‘dig’, and the site has been designated an ancient monument, but it might be possible to carry out a small scale investigation without disturbing the environment, the residents, or the Society for the Protection of Ancient Monuments!

Churches were often built on high ground for the greater glory of God and also for the more practical reason that they were used as a refuge during times of trouble. It is not surprising therefore that Hough Church is incorporated within the motte and bailey It is highly unlikely that we shall never be in a position to discover accurate and detailed information about our own motte and bailey, but it is possible for us to, reconstruct its likely history by reading about similar sites about which far more is known’.

We might speculate whether the Normans in fact took over an iron age fortification. The Celts, who were a war-like people took steps to fortify themselves by building huge banks and ditches on high ground. The site of the motte and bailey is ideal from the point of view of defence, springs provided fresh water and with hard work the land could be cultivated.  It is an exciting thought that the present inhabitants of Hough continue to live and work in what must be a very ancient settlement indeed. 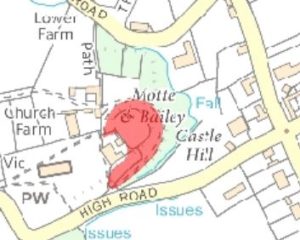