William Joseph Nichols was born in Corby, Northamptonshire c1876, the son of Joseph.  In 1891 he was a farm labourer, living with his widowed mother in High St, Ropsley.

In 1901 he married Mary Jane Richardson, from Grantham.  That year they were living in Syston, where William was a gardener’s labourer.

Soon afterwards they moved to Leadenham where William worked as a gardener at the Rectory.  He also sang in the choir and was sexton (church warden/clerk) for many years. They had 4 children (all born Leadenham):

He joined 7th Battalion, Lincolnshire Regiment on 1 Nov 1915 and was sent to France the following Spring with 51st Trench Mortar Battery.  On the first day of the Battle of the Somme (1 July 1916) his division captured Fricourt, but William was killed by a shell 6 days later, in the early hours of 7th. He was 39 years old.  His grave is now unidentified and he is commemorated on the Thiepval Memorial. 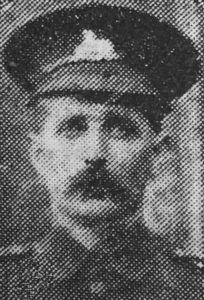