The mostly Georgian Brandon Hall (on Hall Lane) in Brandon, Lincolnshire should not be confused with the nearby Brandon Old Hall (on Hall Road!).  The southern part of Brandon Hall appears to date from early 1700s, probably adding to an earlier building.  It may well be the building advertised in 1728 (see below).  A 3rd floor was added around the 1770s, perhaps to provide servant accomodation for the household of William Ashton (1754-1826) who we believe lived at the Hall from the late 1700s.    There were further changes in the 1800s – for example the north east corner had various uses before becoming a kitchen by the mid 1800s (a souvenir from the 1851 Great Exhibition was found behind the fireplace).

By 1841 farm bailiff John Stoke and his wife Elizabeth may have been living in the Hall, whilst William Robinson farmed the associated land.  The whole property was put up for auction in 1844.  By 1850 Brandon Hall was occupied by William Hawling Preston, who also had Barkston House, Barkston.  Both properties were put up for sale in 1851 but Preston remained in Brandon until his wife died in 1865. He was replaced by Edward Minnitt (probably a relation).  By 1881 another relation, William Preston Mason, lived there.   At some point it was aquired by the Brownlow Estate (Belton House).  In 1891 it was occupied by Robert W. Lord.  From 1900 until at least the late 1930s it was occupied by local farmers, brothers Arthur & William Hickson.

During World War II the building was divided into 3 households, plus German Prisoners of War in the attics and another family living in the ‘potting shed’.  Occupants in the 1950s included the King, Bagworth and Squires families . The property has now been restored back to a single house.  It was sold by the Brownlow Estate in 1979, following the death of the 6th Baron Brownlow. 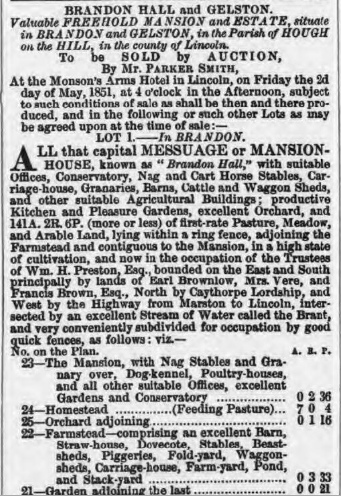