In 1940 fields between Fenton and Stragglethorpe were requisitioned for use as a relief landing ground by training aircraft from RAF Cranwell. Known unofficially as Fenton, the site gradually acquired some huts, though the facilities were always basic.

Flying stopped in February 1942 when worked started to upgrade it to a full-size airfield, named RAF Fulbeck after the parish which included most of the buildings.  The airfield had the usual wartime pattern of 3 converging runways, connected by a 50ft wide perimeter track. The main runway (05/23) was 6000ft long, with 4200ft secondary runways (12/30 and 01/19).

The technical site consisted of at several T-2 type hangars and various workshops.  Aircraft were parked on concrete pans (hard-standings), either side of the perimeter track. The ammunition dump was south of the airfield, surrounded by large dirt mounds and concrete storage pens.  The fuel dump was to the north.

Living accommodation for up to 2,841 personnel was in clusters of Maycrete or Nissen huts, dispersed away from the airfield.  The huts were made of prefabricated corrugated iron with a door and two small windows at the front and back.

During airborne operations, large numbers of paratroopers were moved to the airfield.  Their tents would be pitched on the grass inside the airfield, or wherever space could be found.

By Dec 1942 night flying training was carried out for crews from Cranwell.  In May 1943, a beam approach flight used the airfield. 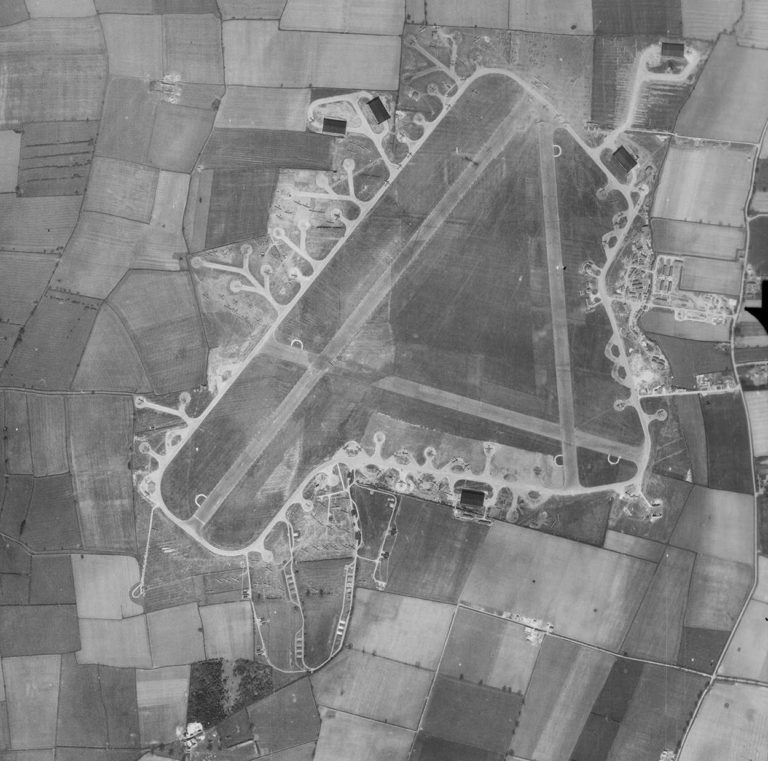 Aerial photograph of Fulbeck airfield in April 1944.  A T2 hangar and the bomb dump are at the south end, the control tower is in front of the technical site on the right. C-47 Skytrains of the 442nd TCG parked around the perimeter.

The Brandon-Stragglethorpe road runs along the right side of the picture.  The top right feature is believed to be the fuel storage site. The northerly access track now leads to the straw storage; the southerly access track is used by the kart club. The crossroads at the bottom right leads to Caythorpe and (now) to PFI karting.

In August 1943 Fulbeck was allocated to the USAAF Ninth Air Force, which involved the building of more accommodation and 15 extra hardstand loops for aircraft dispersal. It was known as USAAF Station AAF-488 during the war (code “FB”).

In October 1943, the 434th Troop Carrier Group arrived at Fulbeck from the USA.  The group was assigned to the 53rd Troop Carrier Wing and flew Douglas C-47/C-53 Skytrains (known as Dakota in the RAF).

On the eve of D-day (6 Jun 1944) the 442nd dropped paratroops of the U.S. 82nd Airborne and U.S. 101st Airborne Divisions near Sainte-Mère-Église.  The following day they flew a resupply mission.

After the 442nd TCG left in June things were relatively quiet until part of 440th TCG arrived in Sep 1944.  On 17th Sep they dropped troops of 82nd Airborne Division near Groesbeek as part of Operation Market Garden (Arnhem).  They towed gliders with reinforcements on 18 and 23 Sep.

The USAAF left Fulbeck in late Sep 1944 and were replaced by 49 Sqn RAF, with their Lancasters.  They were joined on 2 Nov by the recently formed 189 Sqn.  The 49 and 189 Sqn Lancasters remained at Fulbeck until Apr 1945.  49 Sqn flew 60 raids from the airfield, losing 15 aircraft and 189 took part in 40 raids with 16 aircraft lost.  Lancasters from the Automatic Gun Laying Turret Training Flight operated from Fulbeck as did the Bomber Command Film Unit.

189 Sqn moved back to Bardney on the 8 Apr 1945 and 49 Sqn moved to Syerston on the 22nd.  On the morning of transfer, a 49 Sqn Lancaster making a low farewell pass across the airfield crashed into the technical area, resulting 24 casualties among air and ground personnel, including 15 killed.  Including non-combat crashes, a total of 38 Lancasters were lost from Fulbeck.

Post war the station came under No. 255 Maintenance Unit, handling RAF surplus stores, much of the material being disposed of in auctions during 1948. The airfield was then on a care and maintenance status for five years as a sub-station of No. 93 Maintenance Unit.  At one point the hangars housed the Air Historical Branch’s static aircraft collection.  It was used as a relief landing ground for RAF Cranwell from 1956 until the late 1960s, and then again in the mid 1970s.

Fulbeck was also used as a MoD training area.  The runways, apart from narrow strips used as farm roads, were removed in the 1970s but the perimeter track was kept intact. At one time Fulbeck was proposed for a nuclear waste disposal site. The control tower was demolished in the 1990s.  The airfield was sold off by the MOD in about 2012.