Milling corn in Hough on the Hill has been undertaken by various methods from the earliest times. Iron Age folk used a quern to grind their corn. This was simply made of two shaped stones. A top stone with a hole in the top for the grain to enter, this being rotated over a bottom stone thus crushing the grain which would pass out of the sides as the diagram shows.

There is a bottom stone in the Societies collection found at Eastfield Farm in 1983.

These were outlawed in the middle ages after the landlords had been given the sole power to build and work corn mills. The tenants were  bound to give all the grinding corn to such mills in order to extract a toll for the work done, usually 1/6th of the corn ground.

We know from the Doomsday Book of AD 1080-1085 that of the 5264 mills recorded, four mills are mentioned at Hough. These would most likely have been water mills, possibly one or two may have been driven by oxen.

For the water mills  the water would have been stored in a ‘Hammer Pond’ and then released as necessary to drive the wheel. There is evidence of an earth and stone dam across the width of the valley to the east of  Castle Hill, near to the Motte and Priory , which may have been used to hold water for a mill.

Tom Seagraves, who lived at ‘Beechers Farm’ said that Joe Turner, when he lived at Hough, was told that the remains (not now visible) in front of Beechers Farm were of a corn grinding mill. There is certainly enough running water in sufficient quantities to drive a water wheel, even in a dry time.

The waterfall cascading over the man made stone wall that retained the hammer pond.

Windmills were introduced into England from the late 12th Century. The oldest remaining windmills in existence today date from the 17th Century. Normally traces of windmills can be found in the form of flat topped mounds. There was such a mound in a field close to the supposed site of the priory.

It was  excavated by Mr. Sam Gorrin, an archaeologist with Newark Technical College, prior to its removal to make way for an exercise area for horses.  The mound itself was about thirty feet in diameter and five feet high with a flat top. There was a slight depression around the circumference of the mound. These facts would indicate that it was man made in origin.

Mr Gorrin hoped to find a cross of timbers on the top of the mound as has been found in many other Lincolnshire mill mounds that have been excavated. He found, in fact, a T shape of timbers, but he thought that this might only have been a variant of the basic pattern. He excavated a slice through the south side of the depression and mound finding remains of a stone pathway outside of the depression. This did not go all around the mound as no trace could be found on the east side. He found no trace of brickwork, therefore if indeed it was a windmill it would certainly have been of timber construction.

There is no doubt of the windmill on the hilltop off Frieston road. It was in use until 1918, after which it fell into decay and was demolished. A beam from the mill is reputed to have been taken to Brant Broughton Church.

The windmill was of the post-mill type, an early design where the main structure revolves round a central post. The post rose from a ground frame of two crossing beams  usually resting on four piers of stone or brick, and supported by tie-beams. This lower section in later mills was enclosed with bricks as was this windmill. It provided storage space for the miller. Above the lower section a beam laid across  the top of the post holds a framework of weatherboard timbers. There were three floors, the top for the grain bins, the middle for the mill stones and the bottom to receive the flour into sacks.

The mill stones were driven by means of geared shafts from the sails. The lower stone being fixed, the top stone rotating at about 150 revolutions per minute. They were about four feet in diameter, 15 inches thick and weighing about 35 cwts (1.75 tons).

Early sails were covered with canvas, this had the disadvantage in that the mill would have to be stopped if the wind became too strong in order to alter the area of the canvas. Spring sails were introduced from 1770, these had shutters that were regulated by springs according to the strength of the wind. This mill had canvas covered sails.  One of the millers jobs would be to turn the mill, by means of a tail pole, to keep the sails facing into the wind.

The picture of the mill at the top of the page was painted by Miss Partrige of Frieston. The view is looking westwards, with Hough Church in the distance.  It was salvaged by Mr Labraham  after it had been discarded, and later, donated by Mrs Labraham to the History Society.

A key for this mill was ploughed up near to the mill and was also donated to the society.

Similar post-mills can be found at Wrawby, near Brigg, and Danzey Green at the Avoncroft museum, Bromsgrove.

CORN MILLS at Hough on the Hill 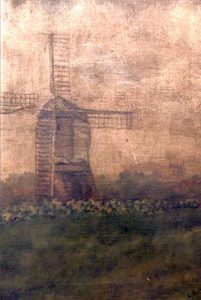 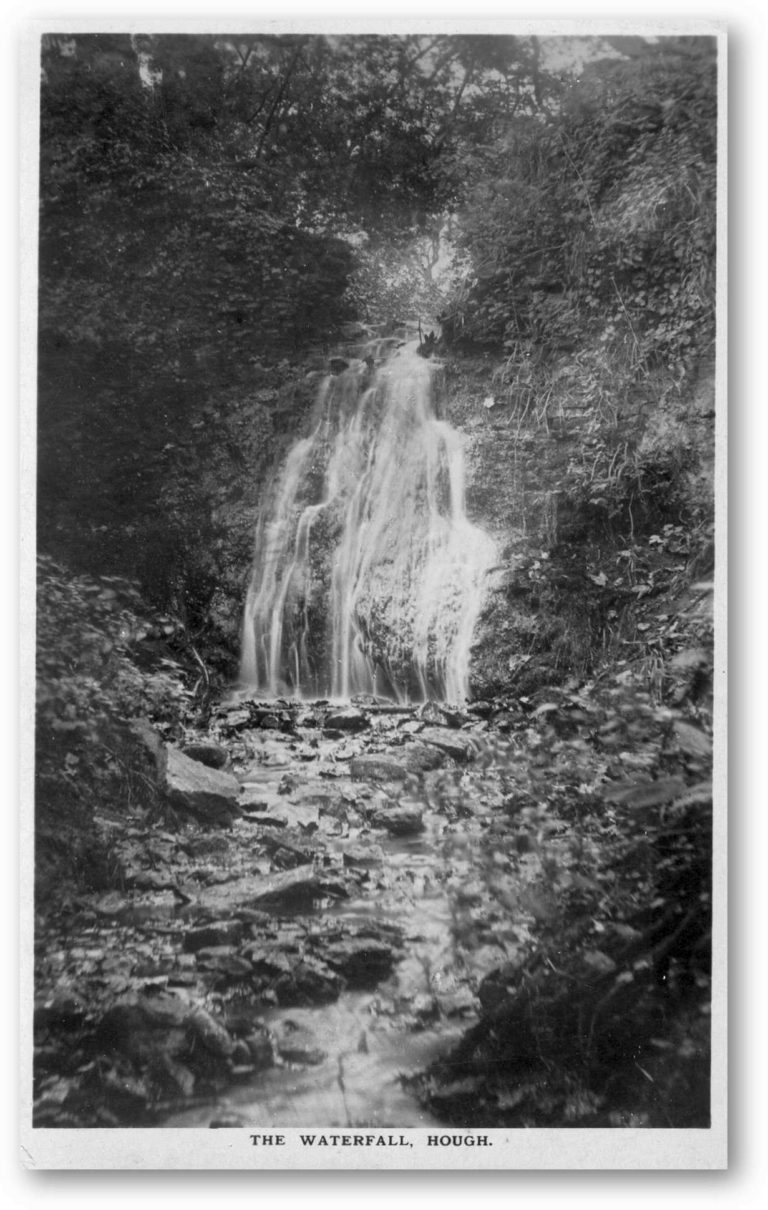 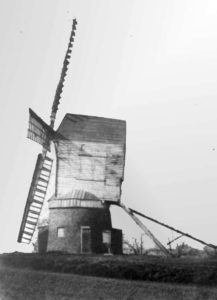 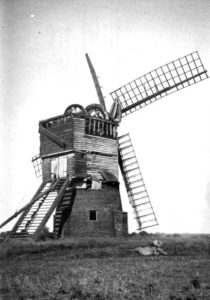