Water Supplies in the Parish of Hough on the Hil

Piped running water came late to this parish and was installed by the Brownlow Estate.  Prior to this water was drawn from wells and springs.

There have been quite a number of wells situated in the parish and the taste of the water changes from place to place depending on the type of rock and soil that the water has to percolate through collecting different minerals and salts.  A list of some of the wells is as follows:

Priory Cottage, had a well of good repute and was classed as one of the finest in the area. Doctors and people in surrounding villages and towns would have water collect& for medicinal purposes, especially bathing eyes. This water was later piped to the row of cottages called Crow Park and the houses up behind. In the middle of Hough people would use the springs.

There was a well along Carlton Road outside estate house no. 19 which was pumped out by hand, to outside no. 21.

Another well was between no.s 29 and 30 Frieston Road and this water was said to have a muddy taste and was most likely to be of a soft water nature (water from the roofs).

A well was also situated between no.s 17 and 18 Frieston Road in the rear dividing wall which was partly soft water, but also spring-fed along a clay pipe from the priory field behind. This would overflow into the waste water system. Other houses in the village would have had soft water wells or tanks as this water was precious for washing in.

At Brandon the water table is very high and pond water would be used along with wells found throughout the village.  A large well, some 22ft deep x 6ft across can be found in the field of Church Lane Farmhouse (originally part of an extension to Church Lane). This water seldom falls below 3ft from the top and was collected for stock and machinery.  A separate one for the house is outside the back door.

At Gelston a well of good repute for its refreshing drink was outside Lambs Cottage and the water for this was pumped up. Also there was a well opposite the cross on the green by the wall and another well could be found at a cottage down the lane leading off the green.

A wind waterpump at Carlton Ashes can be seen that brings water up from a very deep well which is said to be water coming from Derbyshire.  This is collected by people, even today, and it has a splendid refreshing taste.

In Hough on the Hill numerous springs can be found and man of the wells would be fed by their own springs. Other springs would have sources further away but would percolate through banks as in the case of the copper springs, found behind the black gates, one at the bottom of shop hill (near where the telephone box now stands), and a second in the wall of the garden of Spring View. These were cleaned and maintained by the estate who had gates installed in 1926/7 to stop dust and dirt polluting the water.  The origin of the name ‘copper’ is unsure although the metal gates had copper hinges and decorations put on by Mr Nicholson as part of his blacksmith’s apprenticeship, but the word dates earlier than this.

There was a pump in use at the bottom of shop hill (renovated by the History Society in 1991) which drew water from the stream running under the ground. This stream crosses the road and went on to feed the water pumps below the school (see below).  100 yards up the Frieston Road there is a spring running into a trough.  This water is of a very high drinking quality and past village residents have been known to readily drink there when passing. 100 yards further on is the copper spring at Spring View.

At the lower end of the village, villagers would collect water from the stream (which is a tributary of the Brant); the same stream water that is piped across the road at the bottom of shop hill, falling rapidly down and around Castle Hill.  A  gulley off the main stream took water to the troughs opposite the farmhouses and overflowed into a dyke leading to other  troughs in the fields and was then piped across the road, eventually ending up down at Moor Barn farmstead, some 1/2  mile across the fields, supplying stock and farmworkers with water.

Water pumps were built on the side of Castle Hill in Hough.  The water was piped from the stream to a storage tank which was in the bank beside the mechanical petrol water pump (the brick surround is still existing just in front of the school).  The storage tank overflowed and ran to the pump through a pipe.  The pump was situated in the bank of the stream just above the existing waterfall and water was used to propel this pump, pump one third of the water up a pipe and wasting two thirds, which originally ran back into the stream, but later was piped to another pump further down the hill by ‘The Cottage’.  A petrol-powered pump was also installed in the school bank beside the original storage tank in case the others failed.

The first water pump along this route piped water to Church Farm, the Vicarage, and then to Hough House. Later this extended to the Brownlow Arms, the shop and then to the Blacksmith’s Forge.  The second pump was installed by Tom Lord but maintain by the estate and piped water to The Cottage and Eastfield Farm.

The pumps were bought from Wake and Lambs in Newark and the maintenance of these pumps and the copper springs were the responsibility of the blacksmith at the Forge, the last being Mr W. Nicholson.  His rent for the forge was free as long as he maintained the water supply. The maintenance for the second pump was charged directly to the occupants of The Cottage and Eastfield Farm.

The water, when pumped to the houses would go into the roofs in to tanks (some of which were wooden-lined lead tanks) and then each one would overflow in turn to be piped to the next house in line.  One way the water could be checked to be flowing correctly was to check the overflow coming out of Hough House.

The water source feeding these pumps has never been known to dry up.

Mains water was installed in the parish by the Brownlow Estate in 1956 and into Brandon and Gelston at a similar time, and which leaves us with some peculiarities to our water supply today.  For example, a stop-tap in the Frieston Road outside no. 17 turns off all the Brownlow estate houses on the right hand side of the Carlton Road.  The pipe runs up behind the houses and no house has its own stop-tap outside.  The houses are fed by a 4 inch galvanised pipe and the water pressure goes up and down in each of the houses as the different occupants turn the water on and off.  Now, as the villagers are buying their houses, they find that they have a joint responsibility for the pipe. The reason for such plumbing was probably that the selling of such properties could not be forseen as they were all tied to the estate.

Today we believe that all the houses in the area are connected to mains water (with the exception of one small farmstead) either running along the old estate pipes or from modern extensions.  Until just recently the occupants of Laughton’s Farm off the Marston-Brandon road still had water piped to the farm from a gravel filterbed near the source of the Brant River at Gelston, and this still forms the main supply to Loveden House farmstead, presently unoccupied. 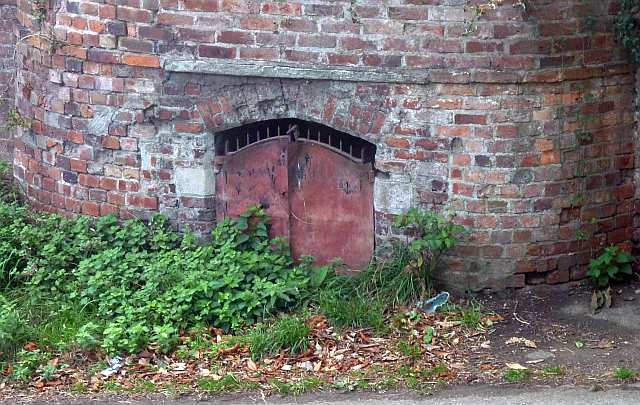